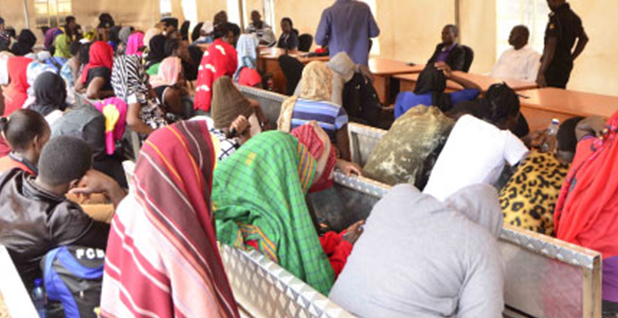 How Ugandan girls are sold to Oman for domestic work

It is becoming usual for audio clips and video footage to be shared on various social media platforms of girls recounting their anarchy and others reporting to be incarcerated in the Arab world.

Most of these cases are mainly from Oman, where desperate Ugandans, mostly girls, are taken in quest for casual jobs.

Even though a report authored by Human Rights Watch in 2016 indicated that domestic workers in Oman are trafficked and trapped in abusive employment, many desperate Ugandan girls continue to be trafficked to the same country by unscrupulous agents, who sell them to agencies in Oman at $2,000 (about Shs7.5m) per head, to work as domestic servants, only later for many to be subjected to inhuman treatment, including sexual abuse.

Just recently, two Ugandan girls were reported to be incarcerated in a house in Muscat, the capital of Oman, with reports that an Oman-based labour agent demanded a refund of Shs7.5m from each girl after failing to work in homes where they had been re-sold to work.

We learnt that a one Isa Kisekka had sold them to a recruiting agency identified as Al-Rakha’a Manpower Recruitment, which reportedly asked Kisekka to refund the money or else the girls would not be released.

Joyce Nanyonjo, one of the victims of this trade told Saturday Monitor that she could not work having survived rape in the home where she had been taken to work and the other girl identified as Resty Namusisi, reportedly in bad health.

Tricks
The two reported that Kisekka, who they say they paid Shs1.3m each, helped them to go to Oman through Kenya in May 2018, after giving them false information about what they were going to do and lying to them that they would freely return to Uganda in case things did not work out.

However, the two began to question the deal when Kisekka told them that at the airport in Kenya, they had to present his photo on a smart phone if quizzed by immigration officers.

To prove the allegations, Saturday Monitor engaged Kisekka in a telephone conversation where we asked him to help a lady to go for work abroad.

Kisekka said the available jobs were in Oman and all we needed was to do was to pay him Shs2m and secure a passport for the intending employee. He told us that if the money was ready, we would travel in the following two days with another team that was ready.

When asked if it wouldn’t stall given the fact that the Ugandan government banned people from travelling to Oman for work, he said we were not to use Entebbe Airport but he would travel with us to South Sudan and use Juba airport.
After failing to conclude on the amount, his phone went off indefinitely.

Just like Kisekka, we tracked down another trafficker, who identified as Badru, who took us through similar guidelines but kept referring us and changing goal posts.

Badru, who kept around Namaganda Arcade in Kampala, told us that he works with several travel agencies, but he advised that he had a quicker way to get us fixed other than going through formal arrangements if we could raise Shs1.85m.

How they are sold
Swaburah Nakalembe, who has been in Oman for the past six years working as a housemaid, says most Ugandans are illegally living in Oman and many were trafficked by individuals in Kenya, Uganda and South Sudan.

Nakalembe unveils that the formulae is that most Ugandan agents (traffickers) are linked to labour agencies in Oman and agents are paid per each girl who manages to reach Muscat.

She explains that what the agencies in Oman do is to clear the girls at the airports and put them in concealed hostels and later, after helping them get visas and work permits, they are resold to particular homes where they work at a fee.

Nakalembe reveals that it is upon the employer to abide by the guidelines or the agency pays back the money if one fails to work.
“It is a business that if you fail to deliver, the owners make loses,” she says.

Another Ugandan living in Oman but declines to reveal her identity, citing safety reasons, says most of the people pass through Nairobi, Juba and Entebbe airports.

She says the traffickers who help people to go to Oman are highly organised and connected with security and the people on the named airports.

“At Entebbe airport, each person pays $200 (about Shs741,428) and you are cleared. For those who have to less money, they use Nairobi and Juba where charges are less,” she explains.

She also says she was helped by a top police officer in Kampala, whose photo she hid inside her passport and she was easily cleared at immigration after paying the said amount of money.

Saturday Monitor’s efforts to verify these claims were futile by press time after Civil Aviation Authority spokesperson asked for time to compile data from various departments to offer a well fact checked comment.

She says the money they make people pay is used to bribe authorities, and transportation to exit airports.
She says most of the traffickers use road transport to Kenya through Mbale District using a connected ring of traffickers that coordinates from several check points.

“They use buses or private cars to travel Kenya and sometimes Juba and in Kenya, documentation is done when the victims are kept in hostels where they are later moved to the airport,” Ms Mwiiza says.

“These agencies have mastered the art of advertising and they know that many young girls are unemployed and that promising them a job abroad will be heaven in their life. These export labour agencies have employees or agents whose work is to move from one region to other identifying potential candidates,” Mr Mpaata says.

Mr Mpaata says the field agents lure unsuspecting girls telling them that it is hard and expensive to use an agency to travel abroad and, therefore, advise them to opt for unscrupulous dealings and they later end up in a mess.

“From part of our research, we can confirm that traffickers promise their baits that they would be earning huge sums of money in salaries and they are charged between Shs800,000 and Shs1.5m. The money is used to smuggle them up to the airports,” Mr Mpaata says.
He reveals that most girls are trafficked through Kenya and Juba in South Sudan.

Mr Mpaata says it is an organised crime that involves many people and he says most traffickers are networked and they know which airport or border to use.

“We have cases of individuals that have also been trafficked through Entebbe airport. At the airport, some victims claim that the traffickers allegedly give them $200 which they put in their passport books,” Mr Mpaata says.
It is also understood that some other traffickers are majorly the Ugandans who travelled to Oman several years ago and that after learning the system, they became part of the ring.

While in Oman
Apparently, Ugandans in Oman reportedly crafted a covert association to fight for their plight.
The proprietors of the said organisation say at least 4,000 Ugandans — with 90 per cent being girls — are currently held in Oman with many in police detention and some sentenced.

Mr Alex Ssembatya, who sits on the committee that brings together Ugandans in Oman, explains that some other Ugandans are sick, others incarcerated by agencies and some yet to acquire work permits.

Mr Ssembatya says mayhem subjected to these Ugandans in Oman has been rampant that those who legalised their presence in the country choose to help others.

However, he says action is still nominal given the huge number of cases that are registered on daily basis.
He says even-though the Ugandan government banned people from seeking jobs in Oman, numbers keep increasing.

Mr Ssembatya notes that those who oppress Ugandans in Oman take advantage of the fact that they are trafficked. He calls on government to make a formal arrangement with the Oman government to harmonise the situation.

“Even though the situation is hard in Oman, Ugandans continue to flock the country. Regardless of what happens to many of them, many are desperately looking for jobs,” Mr Ssembatya says.